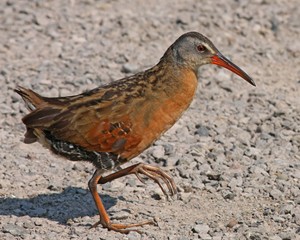 Now is your chance, or at least the best chance you’ll get, to see two of the more elusive
birds at the Ridgefield National Wildlife Refuge. Both of these birds–the Virginia Rail
and the Sora–are members of the Rail family. As mating season begins, many birds
become more conspicuous and the rails are no exception. Just a couple of days ago as
I travelled slowly along “Rail Ally” on the auto tour route, an area between marker #3
and #4, I was able to see at least one Sora running along the edge of the cattails and at
least three to four Virginia Rails. While unheard of at other times of the year, this is not
uncommon during the spring of the year. 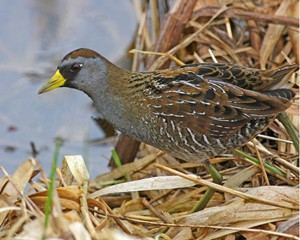 Even though of the same family, the diet of the Virginia Rail and the Sora differ in that
the Sora feeds mostly on seeds while the Virginia Rail feeds mostly on insects, crayfish,
and snails. The nests of both species are built similarly, a few inches above water or on
a dry area, made up of cattails, reeds and grasses usually with living plants forming a
canopy over it. The Virginia Rail has from 5-13 eggs and these are incubated by both
parents. The Sora can have from 6 up to 18 eggs with the parents also taking turns
incubating the eggs.

Both the Virginia Rail and the Sora can be migratory birds, sometimes flying all the way
to Central America. We are fortunate at Ridgefield in that there is a population of both
birds that winter over at the Refuge.

Some of the other interesting and unusual birds that have been seen over the last month
are American White Pelican, Cooper’s & Sharp-shinned Hawks, Peregrine Falcon,
Golden Eagle, Dunlin, Lesser Yellowlegs, Least Sandpiper, Band-tailed Pigeon, Short-
eared Owl, Barn Owl, Anna’s Hummingbird, Pileated Woodpecker, Black Phoebe (rare),
Say’s Phoebe (also rare), Northern Shrike, Hutton’s Vireo, and Cliff Swallow. An
interesting side note is that the Black Phoebes, who have wintered here, are building a
nest on the refuge. This will be the first reported Black Phoebe nest built in Washington
state.

Why don’t you make it a point to come out to the refuge this month and perhaps you will
also be able to spot one of the Rails either along “Rail Ally” or at other marshy areas in
the refuge.