The sharp whistled call of the Black Phoebe is a fairly common sound near streams and ponds of the American Southwest.  This distinctive black and white bird with its tail slowly wagging up and down, perching on a branch and then darting out to catch an insect just above the water is a familiar sight to anyone who lives in that area.  But that is the Southwest!  What are Black Phoebes doing in the Northwest specifically Ridgefield National Wildlife Refuge? 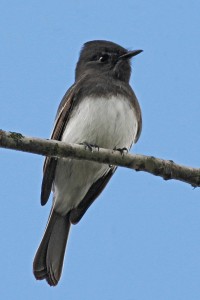 While Black Phoebes have been spotted only rarely in the Northwest, never has one been reported nesting in this area, at least in the state of Washington.  This year Ridgefield NWR has been the host to two Black Phoebe nests and one of the nests is currently being re-visited again for another brood.  According to Randy Hill, acting Refuge Manager, there are either two pairs of Black Phoebes or two females and one very busy male. These nests are located on buildings situated near Bachelor Slough and Bower Slough of the River “S” Unit.

The first nest had four eggs, the second one had five, and the third re-visited nest currently has four more. From the first two broods, at least five birds have fledged last month with the third brood still incubating.  It is difficult to say what will happen to these, at least eight, Black Phoebes, but it is safe to say that some will stay around to enjoy the pleasures of the refuge.

Randy also reported that another bird, not indigenous to this area, the Eastern Kingbird, has been confirmed to be nesting near the shop on Bachelor Island.  It is great to know that our refuge hosts birds that are not only common to the Northwest, but also some that are quite rare to this area.

This month we had a number of other interesting birds that were also seen at the refuge: Redhead, Eared Grebe, American White Pelican (in groups of up to 20 seen off and on for more than a month now), Caspian Tern, Bonaparte’s Gull, Band-tailed Pigeon, Eurasian Collared-dove, Olive-sided Flycatcher, Bank Swallow, Black-throated Gray Warbler, Lazuli Bunting, and Bullock’s Oriole.

Come out to the refuge and you too may be able to see some of these uncommon to rare birds of the Northwest.