This past month was a special month for those of us who are birders and contribute regularly to the weekly bird sightings list.  This list, which is renewed weekly and generally updated daily, is posted on the web at www.ridgefieldfriends.org/bird-sightings.php and also on the window of the Visitor Check-in Station on the River “S” Unit.  It was the first time, at least since I’ve been recording bird sightings each week (about five years now), that we reached 111 sightings in one week. To an average non-birder that might not mean a lot, but to a birder who has birded the refuge and felt good about being able to see 40 to 60 birds, that is quite an accomplishment. 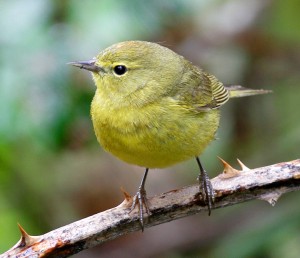 Of course, helping with that milestone was the migration which has been going on for the last month or two.  This means that several of the sightings that we have had are birds that are probably passing through, such as the American White Pelican, Dusky Flycatcher, Cassin’s Vireo, Hermit Warbler, Yellow-breasted Chat, etc.  Also, most of our summer regulars have returned over the past month, like the Yellow, Wilson’s, & Orange-crowned Warblers, Western Wood-Pewee, etc. Also some of our winter residents that do not summer over were still around for awhile at the first part of the month.  Whatever the reason the week of May 13 was a really good week.

Migration is always a fun time at the refuge, for you never know what you are going to see when you look up in the trees or on the lakes.  There are two bird migrations which pass through Ridgefield NWR, one in the spring and the other one in the fall.  The spring migration seems to be the more exciting one bringing more remarkable species to our refuge.

If you hurry, you still might be able to catch the last part of this exciting bird migration at the refuge.