Anyone who has visited the refuge within the last month or so will realize very quickly that the Canada Geese have arrived at Ridgefield.  Many of the fields, and at times the skies, are filled with the musical, cackling/honking sounds of the geese. 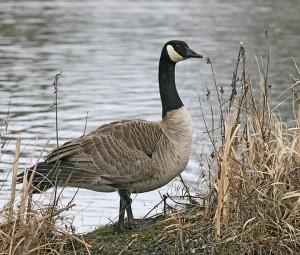 To compound the problem many references list differing subspecies and many times the broad category, Canada Goose, is used for both primary species.

It is the Dusky Canada Goose, though, that provided the reason for Ridgefield NWR to come into being. The refuge was established primarily to provide a wintering habitat for this subspecies of the Canada Goose.  The Dusky’s population was declining, mainly attributed to a massive Alaskan earthquake that dramatically changed the nesting habitat of the Dusky.  It was that declining population that brought about the need for the Ridgefield refuge. Currently a group of refuge volunteers continue to monitor the population of the Dusky Goose on a weekly basis throughout the winter months.

So when you see a large flock of geese, you are no doubt seeing Cackling Geese, but among them, at times, there may be a smaller group of larger and darker geese.  These are probably the Dusky Canada Geese.  If one or two have a red collar with black numbers/letters on it, you can be sure of the identification.

Why don’t you make it a point to come out to the refuge this month and perhaps you will be able to find some Dusky Canada Geese.