It’s been a few months since I wrote my last “Ramblings” for the Ridgefield Friends Newsletter-December to be exact.  My wife and I have been enjoying the warm climes and terrific birding of Southern Arizona (close to Madera Canyon, south of Tucson).  I was able to see a number of great birds there although I only saw one “lifer” this time around, the Streaked-back Oriole (you can read about this find on my blog, Arizona Birding). When we first went to Arizona, some years ago, I had a whole page of lifers—now, only one (I’m sure birders everywhere can identify). 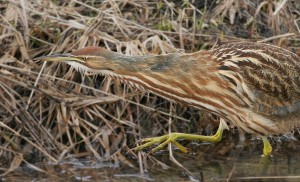 American Bittern skulks through the reeds

It was good to get back to the Ridgefield Refuge, though, seeing some of the old familiar birds, some of these that are quite unfamiliar in SE Arizona, common birds such as the Robin and Crow. One of the birds, though, that I missed seeing in SE Arizona was the American Bittern.  Although it has been seen there, it is rare and transient.  Here, on most good days, especially during mating season, one can see one, two, three, maybe even four of these unique birds along the ditches and wetlands of the refuge.

The American Bittern over the years has gone by a variety of popular names based on its unique characteristics.  Depending on where you are and who you are talking to, you can hear such names as bog-hen, stake-driver, dunk-a-do, meadow hen, thunder-pump, barrel maker, plum pudd’n, Indian hen, and many other fantastic names.  Many of these names are descriptive of its appearance, haunts, or weird noises which is the male’s “song” primarily during the mating season.

Other than the mating season, Bitterns don’t usually “say” an awfully lot.  They are usually seen skulking, very deliberately, among the rushes and grasses along the canals and wetlands.  They are not always easy to spot. Most bitterns bear a camouflage pattern—streaks of variegated brown and buff—which enables them to escape detection by standing upright with bill pointed upward, imitating the reeds and grasses of their habitat.  This “freezing” action is especially true when one is startled. They feed upon fish, frogs, crayfish, and other small swamp and marsh animals, which they spear with their sharp-pointed bills. Once in awhile a bittern might even get entangled with a snake–usually with the bittern coming out as the victor.  The only time that bitterns are easy to see is when you may see one flying across a pond or marsh.

During the mating and nesting season, you will probably hear one before you see it.  You will hear the male vocalizing his peculiar “love song” sometimes audible for more than a quarter mile–a song likened to an old wooden pump.  If you are fortunate enough to have a good view of the contortions that go along with this song, you are lucky indeed. 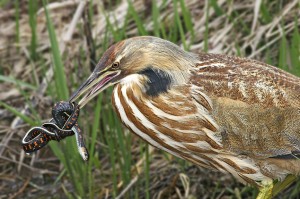 Bitterns build a flat nest of grasses and reeds on the ground or on a mat of marsh vegetation deep within the reeds.  The female lays up to seven olive brown/buff eggs and incubates them for about a month managing this entirely by herself. Once the chicks are hatched, they are cared for by both parents. They generally fledge (leave the nest) 25 days after hatching.

The American Bittern is one example of some of the very interesting birds you can find at the refuge. Of course, for me, most birds I find interesting once I take time to study their habits, habitat, and life history.