Over the last year or so, anyone visiting the Ridgefield National Wildlife Refuge during the spring and summer months would no doubt have noticed, upon crossing the river, a tall metal pole, about 100 feet from the road, having eight white gourds hanging from the pole’s cross members.  These gourds were put there specifically a little over a year ago to house nesting Purple Martins.  This spring is the first time that the Purple Martins are actively using these gourds and many notice the gurgling and chortling greeting upon crossing the bridge and entering into the refuge. 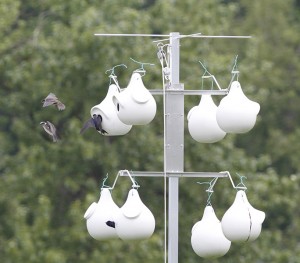 This pole, with its accompanying gourds, is only one of six Purple Martin housing colonies that the Ridgefield NWR staff/volunteers maintain and monitor during the spring and summer months. The other poles and gourds are located in areas inaccessible to the general public on Bachelor Island and the Roth Unit.

Purple Martins are the largest member of the swallow family in North America measuring 7 ½ inches.  The adult male’s entire body color is a blue-black, except for a few white feathers “hidden” under the wings.  The females look a little different being dark on the back with gray mottled undersides.

The Purple Martins are native to North America but spend their non-breeding season in Brazil.   Purple Martins adults return traditionally as warm weather returns, generally in the early part of April.  Typically, adults return to their previous successful homesites.  Adult martins are followed by many waves of younger birds, or subadults aproximately six weeks after the adults show up. These subadults are the martins which colonize the gourds.  In the eastern part of the United States the martins are totally dependent on human-supplied housing, in fact, there are over one million North American landlords hosting colonies of Purple Martins.  West of the Rockies and in the deserts they largely nest in their ancestral ways, in abandoned woodpecker nest cavities. In the Pacific Northwest, though, as at Ridgefield NWR, the Martins are beginning to use gourds for nesting. 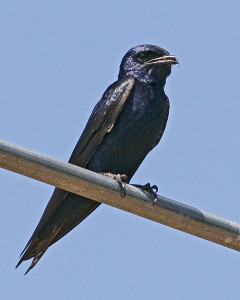 The male and female both work at building the nest out of mud, grass, and twigs.  The female lays two to seven pure-white eggs, incubates them for about 15 days at which time the young hatch. Both parents feed the young continuously for up to 30 days until the young fledge.  Martins, like all swallows are aerial insectivores.  They eat only flying insects which they catch in flight. Since Martins feed only on flying insects, they are extremely vulnerable to starvation during extended periods of cool and/or rainy weather.

Purple Martins have a normal lifespan of about five to seven years with many reaching nine to 10 years.  Because of the long distances they have to fly during migration, the death rate for Martins is high, although the total population seems to remain fairly stable. One of the reasons for this stability is because of the tremendous help that many North Americans give by providing housing for the Martins.

There are several of us volunteers who put up the gourds in the early part of April and then clean them out and take them down in the fall.  Sometimes when we are a little late putting the gourds up, we hear the bubbling and chortling of the waiting Martins flying overhead of us, seeming to say, “Thank you, thank you, but it’s sure about time you got those gourds up!”

Come out to the refuge and be welcomed at the entrance by our bubbly refuge ambassadors, the Purple Martins.  Or, if you are interested in hosting your own colonies, spend a little time on the web where there is a wealth of information on hosting and maintaining colonies of Purple Martins. A good site to begin your education is sponsored by the Purple Martin Society of North America.