It’s Autumn time at the refuge!  And once again, it’s the changing of the guard.  We say good bye to the friends of summer and welcome back our old friends of fall and winter.  Late summer and autumn is migration time and the face of the refuge is changing. 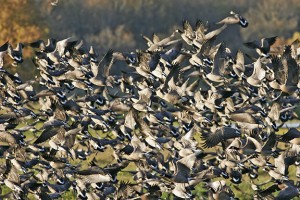 Not only will the leaves be turning red and gold, but the lakes, ponds, and wetlands will again be filling, hiding the mud and plants that were exposed during the dry summer.  The ducks and geese will again be covering the skies and many parts of the grasslands.  The refuge will have a fresh new look, completely different from just a few short weeks ago.

Migration is an interesting phenomenon,  At whatever moment, throughout the year, day or night, there are birds wending their way high in the skies of the Western Hemisphere, migrating.  But it is in the spring and fall, when the continent’s sky is swarming with billions of birds, that migration becomes apparent even to the most unobservant.  And yet, not all migration of birds is done by wing.  When the first winter snow comes, the Blue Grouse leave the warmer foothills of the Western mountains and migrate, by foot, up to the bitter wind-driven cold of the high country, searching for a diet of conifer needles. 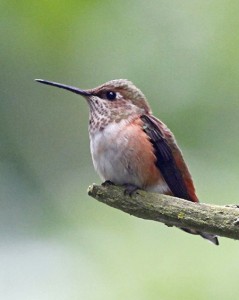 Among our migrating summer refuge birds, the Rufous Hummingbird is one of our smallest visitors. We don’t see these birds every day, so even in the summer it is listed as unusual. It is the feistiest hummingbird in North America and it breeds farther north (Alaska) than any other hummingbird.  It migrates south along the mountain ridges to its traditional winter home in northern and central Mexico. But, more and more over the last quarter of a century, these little tykes are finding their way to the southwest and many places east of the Mississippi. Before this time it was unheard of to find a Rufous in any of these locations. 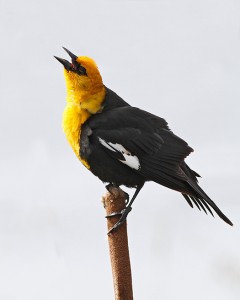 Another distinctive, migrating, summer bird seen at the refuge is the Yellow-headed Blackbird.  Its brilliant yellow head together with its loud rusty-hinge call makes this a conspicuous bird during the spring/summer at the refuge. It is less cold-tolerant than its cousin, the Red-winged Blackbird, and retreats farther southward. Yellow-headed Blackbirds leave most of their breeding areas and occupy a winter range that stretches from the extreme southwestern United States to central Mexico.  At the refuge this year, it seemed as if they began their migration a few weeks early as the last one was seen on July 20. 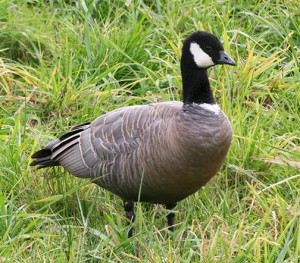 Among our winter refuge birds, the Canada Goose, a.k.a. the Cackling Goose is the most numerous and, because of its numbers, the most vocal of our winter birds.  At one time the Cackling Goose was a sub-species, along with ten other sub-species of the Canada Goose, but since 2004, it can boast that it, along with three other sub-species is now its own species, collectively called Cackling Goose.  Cackling Geese breed in western Alaska along a narrow strip of coastline primarily between the Yukon and the Kuskokwim Rivers.  They generally migrate to the Pacific Northwest in winter. In fact, it was this past week, September 24 -26 that they made their first appearance at the refuge—around three weeks earlier than usual!

I have only mentioned a few of the many migrants that spend a few months each year enjoying the Ridgefield Refuge, whether it be summer or winter.  Of course, though, there are a number of birds that enjoy the refuge year around as permanent residents, but that’s another story.

Come out this fall and notice the changing populations of the refuge.  Notice also the colors of fall.  This is the time of year when the refuge is on display.